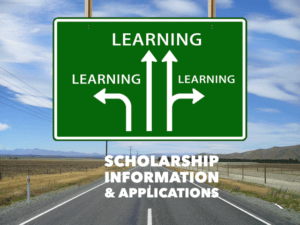 The Stoney Scholarship was established in honor of  the Reverend William Stoney the year before he left Grace Episcopal Church by members of the ECW under the guidance of Canton Lentz, Sara Roberts and Rose Kilby. It is awarded on the basis of merit to college students who are active members of Grace Episcopal and are recommended by the parish priest.

The Weaver Scholarship, established in December 1990 by Harriet Donoho in memory of Alta Weaver, is awarded according to need to any Calhoun County student who is a member of any Christian denomination and who wishes to pursue continued education as a freshman at any high school, college, seminary or other institution of higher education. Recommendations may be from the school principal, teacher, counselor, headmaster or dean at any area high school, and the applicant’s rector.

The Henry Scholarship, established by Mrs. Charles L. (Carolyn) Henry, Miss Georgia Lynn Henry, Mr. and Mrs. Charles L. Henry, Jr., Mr. & Mrs. Eugene F. Henry, Mr. and Mrs. James W. Henry and Dr. and Mrs. John F. Henry during the Spring of 1990, in memory of Margarete Nonnenmacher Henry, to be awarded to men, women and young people attending seminaries, colleges, private high schools (with priority for Camp McDowell) and conferences such as Cursillo and Happening. It is not necessary that a recipient be a member of Grace Episcopal Church, but such members should be considered to have priority.

Applications available in the church office and should be received by the outreach/scholarship chairman by March 31. Awards are announced in June. Each application must be accompanied by a transcript, a photograph and a letter of recommendation from the parish priest (or senior warden, if there is a vacancy) or pastor of the applicant’s home parish.

Anyone wishing to make a donation to any of these scholarships, in memory of or in honor of someone, may do so by sending such donation to the church office of Grace Episcopal Church (P.O. Box 1791, Anniston, AL. 36202) and designating it appropriately. Acknowledgement notes will be sent.

Visit Our
Member Directory
Sign Up
for Our eNewsletter